Alex Michaelides wrote The Silent Patient characters in proper depth. From the murderer to her noisy neighbour, each of them has a part without wasting any page or ink.

In this post, I’m going to talk about all of them individually, including how their appearances are described and what role they have in the book.

Previously, I have also discussed the book in many aspects here: Answering The Silent Patient Book Club Questions.

Alicia is the silent patient. She has red hair and is a thirty-nine-year-old talented painter that has an uncanny ability to grab people’s attention with her works.

Her childhood influenced her greatly. She lost both of her awful parents when she was a child, one was because of an accident and another committed suicide because of said accident.

Her resentful aunt took her under her wing, and Alicia worked hard to finally be able to leave that house.

Later in life, she was found to be guilty of her husband’s murder. She went silent and never spoke again after that.

As our narrator, we spent many times with Theo Faber’s thoughts and actions, as shown in The Silent Patient quotes here.

He was a new psychotherapist in the Grove. He applied for the job because of his interest in one of the patients, Alicia Berenson. He would do anything to make her speak again.

In many ways, Theo has similarities in life with Alicia. From horrible parents and childhood to untrustful partners, which after many stalking attempts later he found out has an affair together.

Theo didn’t take this matter lightly. He loved Kathy, she meant a lot to him.

When Alicia was alone at her house, he broke in, yet after many stalkings as well. However, he was not intended to murder her. He went, to tell the truth to Alicia about their partners and gave her a gun along the way.

To us, he admitted that he didn’t expect Alicia to actually pull the trigger.

Gabriel Barenson was forty-four years old when he was murdered. When Alicia did her painting at home, he was out to photograph models for Vogue.

Alicia believe he was loving and sweet, despite some arguments. But after not believing what she saw and cheating with another woman, Gabriel is better dead for her.

Theo thought that Kathy is beautiful. She has long black hair and piercing green eyes.

She is an American professional actress ever since she signed a contract with an agent at the end of her first year at drama school.

To Theo, Kathryn is his wife whom he always referred to as Kathy. They first met in a bar with their own dates that weren’t a match for them.

Gabriel has a brother named Max whom he thought highly of. Although, from Alicia’s diary, we know that Max was a harasser towards his wife. Every time Alicia brought up that she wasn’t comfortable around Max, Gabriel always brushed it off.

In the present, Max has a wife named Tanya that scared of him. He was easy to anger and violence.

Apart from being a clinical director of the Grove, Lazarus Diomedes was a professor of forensic psychiatry at Imperial College.

In his sixties, he looked younger and more handsome. When he spoke, he had a slight Greek accent that was mostly lost after having lived in England for over thirty years.

At the Grove, he acted like a mentor to Theo. Even if it was against Grove’s manager Stephanie, Diomedes believed that Theo would succeed in making Alicia talk.

Christian is a good-looking guy in a bashed-up kind of way, with a dark beard and a broken nose.

A bit of rivalry was going on between Christian and Theo. They know each other from Broadmoor, but they didn’t work together long.

In the Grove, Christian is the head of Alicia’s care team, so they had to work with each other.

Later, it was revealed that Christian knew Alicia even before she was put in the unit. He was Gabriel’s friend and Alicia’s informal therapist.

Alicia’s works were represented at the small Sogo gallery, which was managed by Jean-Felix Martin.

He’s a handsome man with black eyes and hair, and he knows Alicia for years. He’s originally from Paris but ever been in England since he was a student for twenty years.

Leading up to the night of the murder, however, Alicia tried to cut ties with him. She felt like he used her for her artistic reputation.

In his late thirties, Yuri was still well-built and good-looking. Above his collar, there’s a tribal tattoo creeping up his neck.

He’s the one who showed Theo around the unit and bring him to his office. Not only that, he was the first person that warned Theo about his obsession with Alicia.

In the end, though, we found out that Yuri is working with Elif to deal drugs.

Did you enjoy the book?
Show me more books like The Silent Patient.

A son of Lydia Rose, Paul is Alicia’s cousin. He has about the same age as Theo, but taller and more broad. Same as his cousin, he has red hair, but with a boyish face.

Paul idolized Alicia when they were a kid. But after she left his house, Paul lost touch with her and only reached out when he needed money to pay for his debt because of his gambling problem.

Another patient that has a spotlight in the book is Elif. She was a problem-maker and always angry.

She was in the Grove for the double murder of her mother and her sister.

Before Theo came to the Grove, Alicia once tried to slash Elif’s throat with the jagged edge of a smashed plate because Elif whispered something to ignite Alicia.

Portrayed as noisy and annoying, Barbie Hellmann was Alicia and Gabriel Berenson’s neighbour.

On the night of the scene, Barbie heard several gunshots and immediately phoned the police.

Later, she met with Theo to tell him everything she knows about that night, as well as days prior that led her to believe Alicia was not the real murderer.

When Theo realized he needed help, he found Ruth, a psychotherapist who referred to him through the university counselling service.

With her white hair and plump figure, she would sit and just listen when Theo was talking. But when he looked up, Ruth would be weeping, she holds everything he is afraid to feel.

Years after the therapy ended, Ruth and Theo remain friends. And when he found out about his wife’s affair, he came to her. She advised Theo to end the relationship.

In her mid-forties, Stephanie has a sharp and angular bob. She was a Caribbean who now is the Manager of the Grove.

She shows her authority upfront when Theo meets her. With a firm and tight grip, she is less welcoming than the other psychotherapists.

However, she cares a lot about the safety of the unit and everyone inside it.

As a consultant psychotherapist at the Grove, Indira was the one who interviewed Theo when he applied for the job.

From her owlish glasses to her long jet-black hair streaked with grey, she appears to be in her late fifties.

As her name suggests, she radiates the feeling of warmth every time you are around her. She is definitely one of my favourite The Silent Patient characters.

Blond, pretty, and rather petite, Tanya appears as a caring woman as she disclosed every piece of information that she knows about Alice to Theo.

She was observant that always noticed when something was up, such as her husband Max’s feelings towards Alicia. But she was afraid of him.

As Alicia’s art therapist, the short blond hair Rowena shows that she doesn’t like Alicia very much.

With a deep-etched frown and a weary put-upon manner, Rowena mentioned Alicia as “the most uncommunicative b* I’ve ever worked with”.

Upon that, she clearly shows her jealousy towards Alicia’s talent. 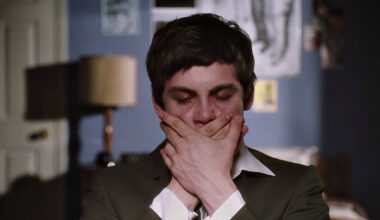